PIP is founded in 1965 by Bill LeVine as a “while you wait” print center, and the first three PIP franchise locations are opened in Los Angeles, Calif. in 1968.  Sir Speedy also opens its first franchise location in Costa Mesa, Calif in 1968. 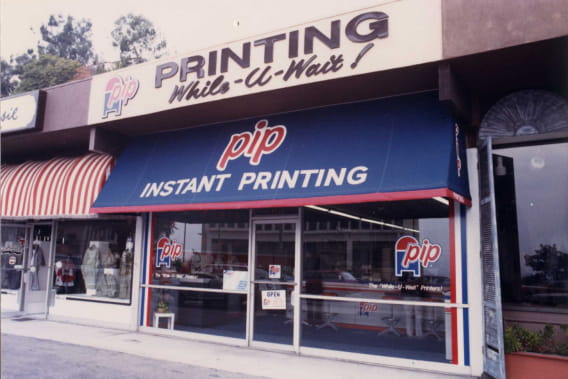 Sir Speedy is named the fastest growing franchise in the country and is then purchased by Kampgrounds of America (KOA) in 1977.  KOA appoints its CEO Don Lowe to lead the company, which then becomes the third-largest franchisor of quick print centers in the U.S. Multicopy opens its first franchise location in Amsterdam, Holland, and expands into France, Poland and Austria. PIP Printing goes public in 1973.

Sir Speedy launches a new ad campaign to position the stores to serve the needs of business customers. Sir Speedy is the first to introduce a nationwide network of fax machines and color copiers and the first to move from traditional to desktop publishing. By late 1987, Sir Speedy becomes the second largest franchise in the industry. PIP is purchased in 1989 and becomes a privately owned company.

Franchise Services, Inc. (FSI) is formed to operate and manage the Sir Speedy franchise network and family of brands. FSI formed the backbone of its global network, and became the first in the franchise industry to successfully and profitably exploit the power of the Internet to help its franchisees support their customers. Summit Marketing Communications, an advertising and marketing company, is established in 1994.

Sir Speedy and PIP roll out Web-to-Print services–the first to do so in the printing industry. FSI purchases the Signal Graphics network of digital printing centers, strengthening the organization’s market share. The brands adopt a new strategy as printing and marketing services providers. FSI launches TeamLogic IT, as a computer support and maintenance franchise network.

Sir Speedy, PIP and Signal Graphics enter the signage market. TeamLogic IT changes its strategy to comprehensive managed IT services and reaches a franchise milestone of 100 units across North America. The company also ranks as one of the top Managed Service Provider's in the world.